Bike Ride Up a Mountain

After the great breakfast we had, we took the bikes and left for a ride. Jane had recommended that we check out the old Highway 30 bike route. It’s the old Highway that they closed to car traffic. Only foot and bike traffic is allowed.

To get to this trail, we rode through downtown Hood River–which is all downhill in THAT direction… 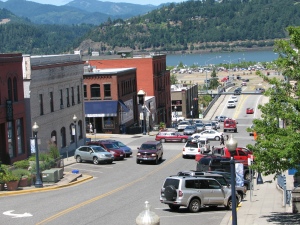 We headed out of town and found the very steep, winding road up to the trail. Here’s the view from half way up that hill:

The hill was intense but not killer. I took it easy at first, not sure if my hip would act up from the steep incline. I had no pain so I kept going. My quads weren’t burning but I was breathing hard. It was like lamaze class or something!

I hope you guys can tell that the elevation is pretty high! We stopped halfway up the road to rest for a minute. I took a ton of photos and then we hopped back on the bikes.

The trail was really cool! It was a nice ride–all uphill of course–with views of the Gorge.

It was a hot day out and I was sweating like a pig! There were some shaded areas of the trail where we went through tunnels and through tree tunnels. It was a really scenic ride.

Besides the amazing view, the wildflowers were everywhere!

We rode the entire trail –which probably wasn’t more than 10 miles long–and then turned around and headed back to the room. Going downhill fast is one of my fears about the bike. I was nervous about going down those winding roads. But honestly, it was okay. There wasn’t much traffic and the wind was so strong it kept me from going too fast anyways. We got back to Hood River and road UPHILL again! Hood River is built on the side of a huge hill and the roads are pretty steep. This part almost killed me!

I don’t think these pictures do the incline justice! But trust me when I say it was brutal. At least it was only 9 blocks, right? 😉 We made it back to the BnB and I took a moment to rest!

What a great ride! Here’s the stats:

After the bike ride we both used the Foam Roller (of course I brought it!) and then I enjoyed another bath in the jacuzzi tub. We cleaned up and got ready to head out for lunch. At this point I think it was just after noon! We’d done so much already.

5 responses to “Bike Ride Up a Mountain”